Raw, soulful, and with plenty of swagger, Town Mountain has earned raves for their hard-driving sound, their in-house songwriting and the honky-tonk edge that permeates their exhilarating live performances, whether in a packed club or at a sold-out festival. The hearty base of Town Mountain's music is the first and second generation of bluegrass spiced with country, old school rock ‘n’ roll, and boogie-woogie. It's what else goes into the mix that brings it all to life both on stage and on record and reflects the group's wide-ranging influences – from the Grateful Dead's Jerry Garcia and the ethereal lyrics of Robert Hunter, to the honest, vintage country of Willie, Waylon, and Merle. The Bend Bulletin’s Brian McElhiney says Town Mountain, “has serious country and rock ’n’ roll DNA.” Town Mountainfeatures guitarist and vocalist Robert Greer, banjoist Jesse Langlais, mandolinist Phil Barker, fiddler Bobby Britt, and Zach Smith on bass.
Town Mountain is working on their 6th studio album which they recently finished recording in Echo Mountain Studios with Producer Caleb Klauder. The forthcoming album will be full of new original material and released later in the year in 2018. Their most recent album, Southern Crescent, was released April 1, 2016 and debuted at #4 on the Billboard Bluegrass Chart while staying for ten weeks on the Americana Music Association's radio chart Top 40, and widely considered one of the best bluegrass albums of that year.

"Town Mountain is known as the purveyors of the swagger-induced, honky tonk side of bluegrass music. They keep their live shows fun and rocking." -  Derek Halsey, Mountain Times

"This Asheville band killed it at the Ryman this summer opening up the bluegrass series and they put out this stellar collection of original songs that asserts them as the hippest, bluest traditional bluegrass band of their generation. In an era of bluegrass with manners, they cut with a serrated edge." – Craig Havighurst, WMOT

With a love of language and traditional bluegrass instrumentation, City Hotel creates an unmatched experience for audiences. Formed in the summer of 2011, City Hotel has since released three albums and become a pillar of the Savannah music scene. The group has cultivated a strong following in the low-country, played extensively throughout the Southeast and toured the Eastern coast of the United States from Miami up to New York. Like the city of Savannah they call home, the band remains fresh while being soaked in nostalgia. City Hotel music is rich with witty lyricism and distinctive compositions and the group is known for their inventive interpretations of classic bluegrass standards as well as pop, soul, funk and indie hits. The band’s stage chemistry is both infectious and hypnotic, and its performances speak to a wide range of musical tastes. City Hotel reflects everything music should be: authentic and heartfelt, quirky and imaginative, deep and enigmatic, and representative of an unabashed love for the art of the craft. 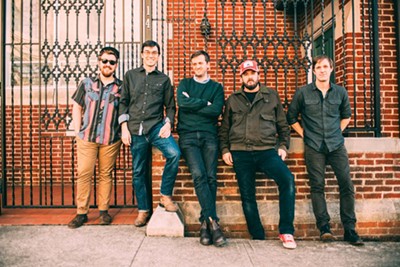