Same As It Ever Was - A Tribute To The Talking Heads

Friday - Same As It Ever Was

Saturday - Same As It Ever Was

Same As It Ever Was - A Tribute to the Talking Heads

…And local rock group Same As It Ever Was is all about defying expectations. "When we first started the band, it was definitely about the music first and foremost," founder Curtis Geren told The Daily Times this week. "We try to have some visually stimulating things going on. The guys wear costumes at every show, and we keep it Why the Talking Heads? Geren remembers watching the band's videos when he was a child, but it wasn't until his teenage years that he rediscovered the band's music again. "I respect the fact that they discovered a way to move the body and the mind at the same time," he said. "It's very conceptual and very profound music, and at the same time it gets people dancing. It's fun, very creative and very surreal at the same time. "At first, we were just excited to play the music itself, and anything else that might have come out of it remained to be seen. I think it was meant to be a really good ode to the Talking Heads, a really well-done tribute." What it's become is one of the most innovative groups and fun shows all over. Before forming SameAs It Ever Was, Geren researched online and found no other Talking Heads tribute bands out there. Today, he's part of an all-star ensemble that includes his brother Grant on rhythm guitar and vocals; Taylor Hiner on bass and vocals; Rusty Davidson on keyboards; Matt Aurand on percussion; Josh Hobbs on lead guitar; Steve Corrigan on drums; and local torch singer Sarah Clapp on backup vocals. The group's music alternates between faithful recreations ("Houses in Motion," "Crosseyed and Painless") to reinterpretations ("Stay Hungry.”) - The Daily Times 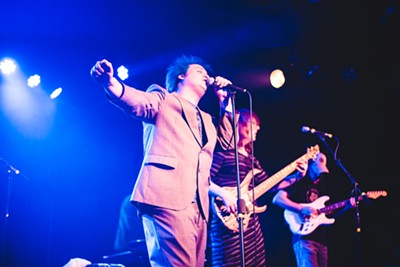